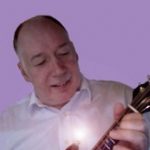 Nigel Gatherer has been MD of EMGO since its inception in 2008 and is our first Honorary Member. Nigel is recognised throughout the folk scene – giving a wide range of mandolin, whistle and mixed instrument classes and seminars. Many in EMGO “graduated” from his classes or attend his seminars. As of 2018, Nigel is not conducting EMGO on a week by week basis but, as our Associate Musical Director, working on arrangements of Scottish traditional material for us – and mandolin and guitar outfits in general! – which he will then introduce to, and perform with, us.

Peter Siekmann has been chairman of the Mandolinen und Gitaren Orchester Dortmund (MGOD) for a good many years.  He organised the very first visit of a sister group to EMGO in 2013 – a visit which was (most enjoyably) repaid in 2015.  Peter collaborated with EMGO guitarist, Richard Lathe, in arrangements based on “Flow Gently Sweet Afton” – which has been performed both “home” and “away”.  Through the link with MGOD, EMGO has been introduced to a number of attractive pieces.  Currently the Telemann “Don Quixote Suite” is being much enjoyed by EMGO. 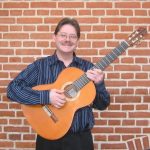 Per Graversgaard is Copenhagen based where he plays and teaches guitar.  In late 2015, when Per took part in the Edinburgh visit by the Norwegian Mandolin Orchestra (conducted by Reidar Edvardsen), he generously also joined up with EMGO and provided a much needed sound – an acoustic bass guitar.   So agreeable was this for EMGO that they persuaded Per to come back and join us at the BMG Festival in Glasgow in March 2016.  Per has also generously given EMGO  a number of his arrangements for  mandolin and guitar orchestra.  Two of these  – “Creole Belles”by Scott Joplin  and music from the film “La Vita e Bella” have been great favourites with us in 2017.